Jessica Chastain is the beautiful new face of Glamour Magazine‘s November 2014 issue. She has skyrocketed to fame in the last six years, with 18 films, two Oscar nominations, a Golden Globe, and $640 million in box office ticket sales ago. She told Glamour Magazine she was a “late bloomer,” because in fact, Chastain was a theater actress who’d never been in a film and at an age, 31, when many begin to think of giving up on Hollywood she kept going. She soon went from a the small Sacramento City College to New York’s prestigious Juilliard School, thanks to the Robin Williams scholarship she was awarded. 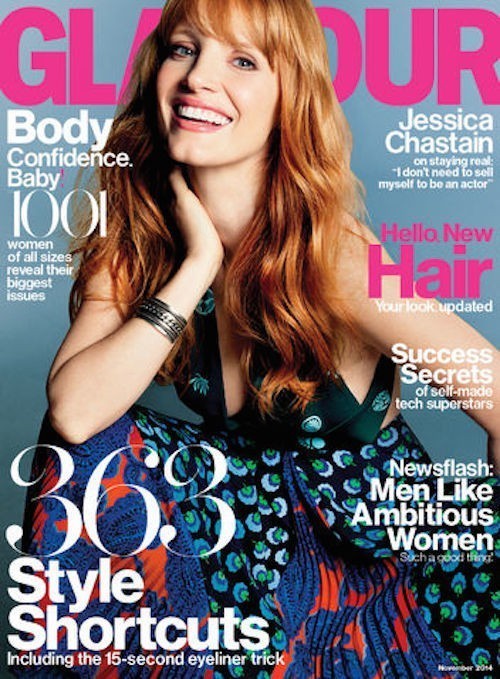 Chastain commented on her childhood, and how social media is contributing to more of an intense bullying atmosphere at school.

“I remember being eight years old. I was a late bloomer. I had very, very short red hair. Very freckly. And thank God there wasn’t the Internet, because I was told every day at school that I was ugly. And that no one wanted to be my friend. The most cruel things. And now these girls or boys are having to deal with that in their school and on a world platform. If I can do anything to help young girls and to be a cheerleader for people who sometimes have low self-esteem, I want to do that.”

So, how did she turn from feeling bullied to empowered?

When Glamour asked how and why bullying got better, she said, “My life changed when I joined drama. You know, like Glee: You don’t fit in, and then you find a group of people that understands you. You have to find your people.”

RELATED: HOW TO PLOW THROUGH BULLYING AND DEVELOP A FIERCE INNER CORE

Chastain has taught us all that it’s okay to be a “late bloomer” because everyone grows and prospers at their own, unique speed. It’s important to find a place where you’re secure and thrive, and certainly around others who are positive. Redheads, your life is too important (and too short) to feel undermined by bullying. Love yourself, find the “right place” and always Rock it like a Redhead!