Clint Frazier is a top outfield prospect for the New York Yankees; he’s also sporting (what I would call) the ‘top mane’ in the game.

His spectacular curly red hair is unlike anything the MLB has seen, and if recruited to play for any other team in the league, Frazier’s voluminous locks would be embraced — idolized even! 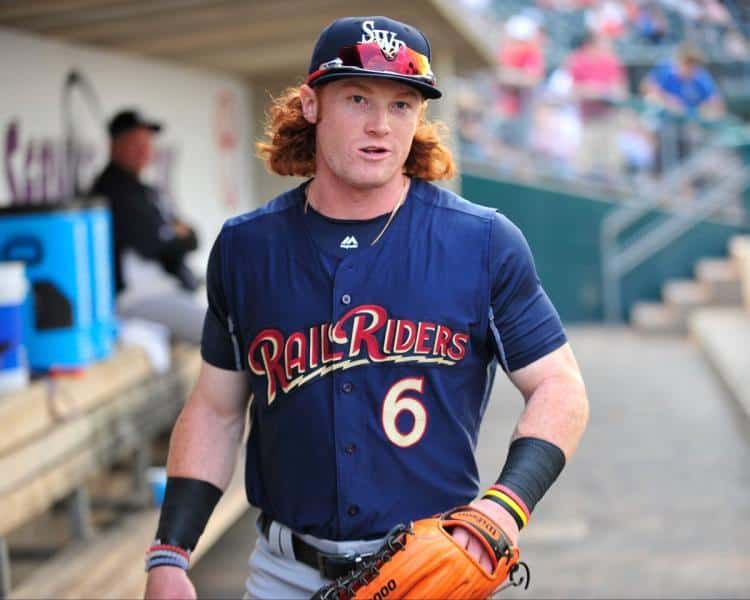 I can picture fans donning their red afro wigs in the stands, anxiously awaiting Frazier’s turn at bat. But, we’re not talking about any other team in the league; we’re talking about the New York Yankees—a franchise known for their strict clean-cut policies.

The Yankees are all about melding their players into a team, therefore traits that would promote individual attention are not tolerated.

They follow a formal homogenous dress code, players do not have their names on the back of their jerseys, and they do not allow big hair or beards—nothing that would cause an individual to stand out from the rest of the team.

Some may say that it is this team-focused philosophy that has made the club so successful throughout history, but others disagree.  You may remember when Johnny Damon, known for his Jesus-like hair and beard, was traded from the Red Socks to the Yankees; his iconic look was shared immediately. Many fans believe this haircut was a Samson-sized mistake, saying he’s just not the same player since he lost his hair.

What could this mean for Clint Frazier?

According to the New York Times, Frazier could be a starter this season, and the club has high hopes that he will bring a youthful enthusiasm to the game which Yankee Stadium has been lacking recently. With his lively red locks and personality to match, maybe he can raise those television ratings that have been dropping for the Yankees ever since Derek Jeter and Alex Rodriguez retired.

Frazier told the New York Times, “It’s awesome that people take notice of what I’ve got growing on my head.  It is a part of me, it is unique and I like it.”

Axe men’s grooming products and Big Red chewing gum have already reached out to Frazier, hoping to do business with him as soon as he makes it into the starting line-up.  But, if Frazier enters the lineup without his signature red curls, would these companies back out?

This may be a difficult balancing act for the young athlete. I’m sure it’s every little tee-ball player’s dream to play one day for the New York Yankees, but is Frazier willing to give up his individuality to make this dream come true? According to a recent post on Twitter, maybe so. 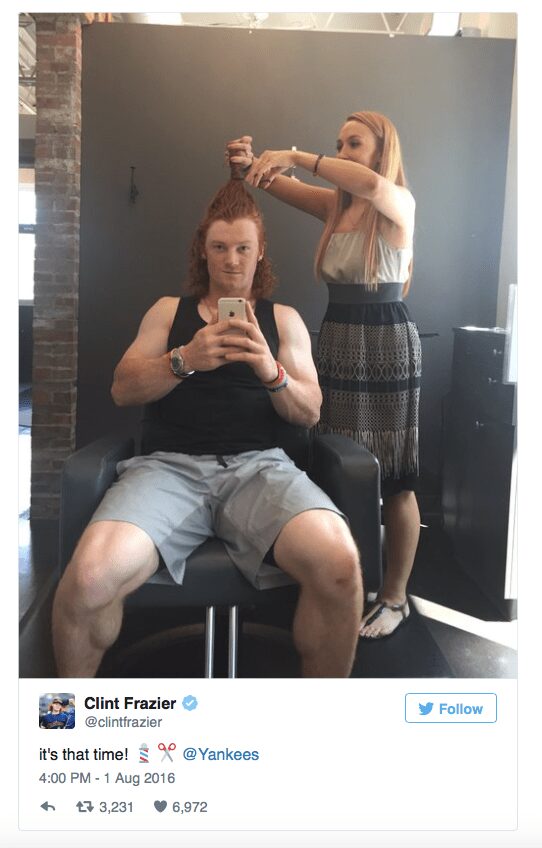 He revealed his new cut on his Instagram page, and the curls are still intact. It is possible, though, that if he starts for the Yankees this season, it will all have to go. 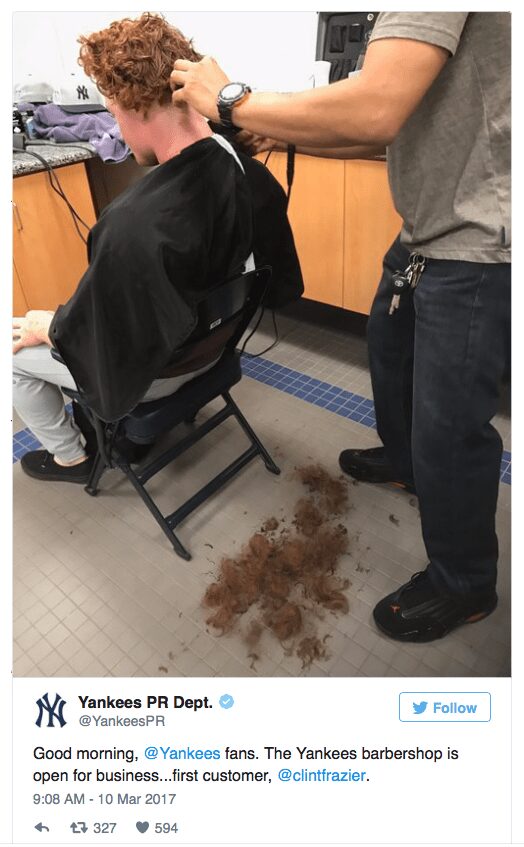 Clint, no matter what happens to your gorgeous locks, keep the redhead tweets coming:

So, what do you think, redheads?  Does this situation call for maintaining tradition or loosening the reigns?  Is it finally time for the Yankees to let their red hair down?

Let us know your thoughts on this controversy by commenting below! 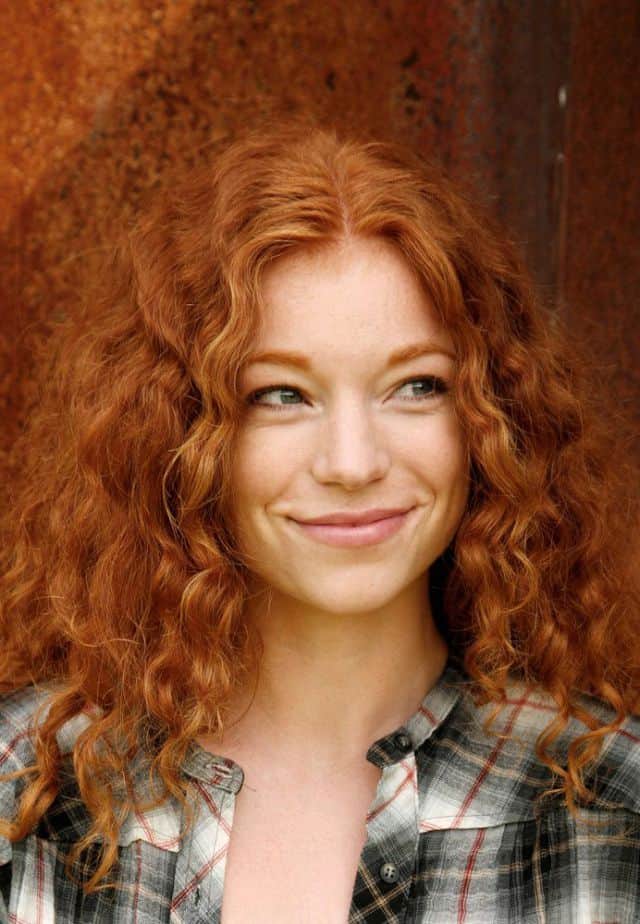 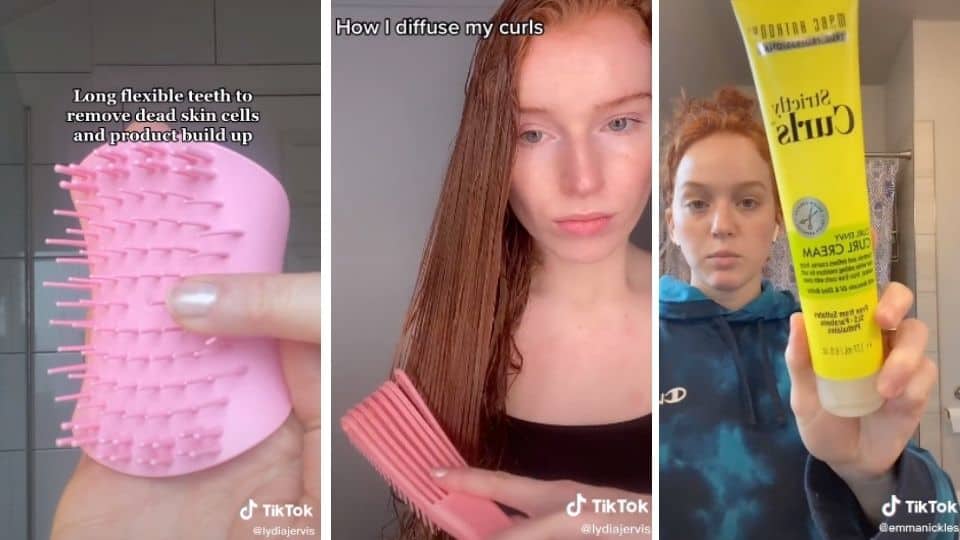 6 Must See TikToks for Redheads with Curly Hair