“I wanted to explain that I am constantly overestimating and underestimating the human race–that rarely do I even simply estimate it. I wanted to ask her how the same thing could be so ugly and so glorious, and its words and stories so damning and brilliant…I am haunted by humans.”

This is a quotation from one of my favorite books, The Book Thief, and in it I think the narrator accurately summarizes the world we live in today–a world full of injustice but also activism, oppression but also freedom-fighters, poverty but also generosity, darkness but also light.  The human race has made its mistakes, but I love that there are humans striving to correct those mistakes.  I’m just returning home from a few weeks of working alongside a group of women fighting to end human trafficking in Europe.  The work these women do on a daily basis is exhausting, but also amazingly refreshing, and they inspired me not only to continue fighting for this cause, but to begin researching redheaded women everywhere who are fighting other injustices and working to make the world a better place.

This is by no means an exhaustive list, but I wanted to draw attention to ten redheads who have been recognized recently in the media for their work to change the world we live in. 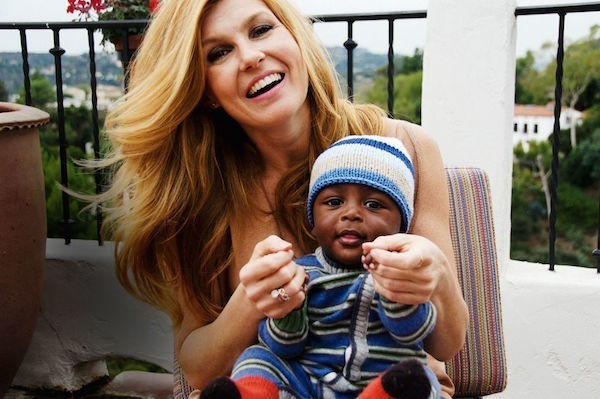 Connie Britton was actually my initial inspiration for this article.  I came in from an overwhelming night of visiting trafficking victims in the “red-light district” of a certain city, and decided to scan through Instagram to lighten the mood.  That’s when I saw this Connie Britton Instagram photo. Connie with her adorable son, “Yoby,” promoting Night of 1,000 Dinners to raise awareness and funds for Worldwide Orphans.  My first thought was probably the same as yours–this woman has the hair of an angel!  But what an inspiration to see that she definitely has the heart to go along with it.  Britton was also recently appointed as a UNDP Goodwill Ambassador, and as such, will raise awareness of UNDP’s work to eradicate poverty and empower women locally and globally. 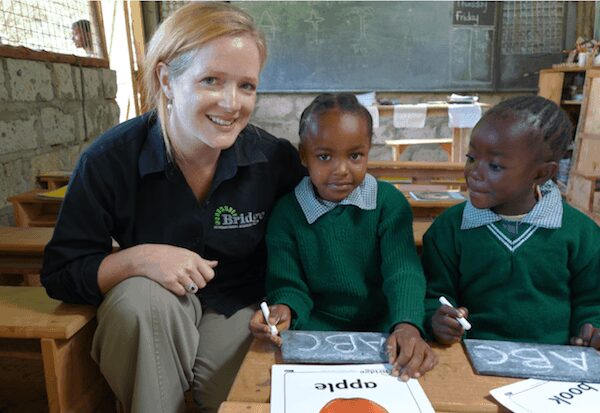 While conducting educational research in rural China, Shannon May saw first-hand how the primary education system was failing families living in poverty. This prompted more research on how to teach these children the skills they needed to survive, and the results were Bridge International Academies, the world’s most prominent provider of primary education for families living in poverty ($2.00 or less a day).  Bridge International launched its first school in Nairobi in 2009. Now it educates over 100,000 pupils and plans to continue expanding, ensuring that all children have access to a great education, regardless of their economic status. 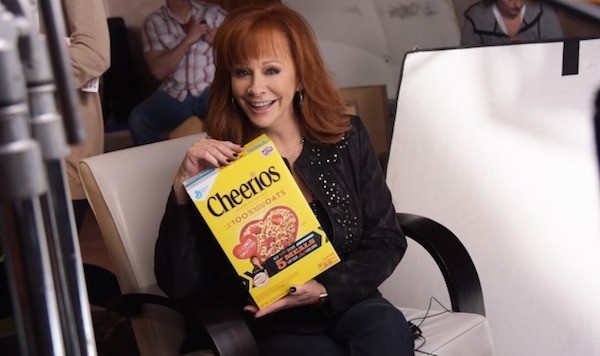 Over the years, Reba has been a part of more charitable causes than can be listed here, but recently she has become of the face of a joint initiative from Feeding America, General Mills, and Big Label Machine Group called Outnumber Hunger.  In addition to being a spokesperson for the campaign, Reba also agreed to host a charity concert in April with a few of her friends–Tim McGraw, Rascal Flatts, Florida Georgia Line, and more–in order to help with this cause of feeding the hungry all over America.

READ: Growing Up Red (With Help From Reba, Lucy and Debra) 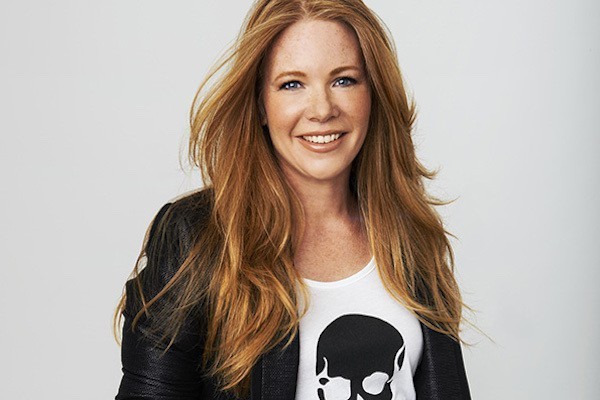 Not only is Elizabeth the co-founder and CEO of SoulCyle, a posh gym that has redefined fitness in NYC, but her organization also raises about $2 million a year for philanthropic causes.  She has begun work with Action for Healthy Kids, Edible Schoolyard NYC, and Children of the City to provide scholarships for at-risk kids to attend SoulCycle classes as a part of a mentorship program that will promote healthy life choices. 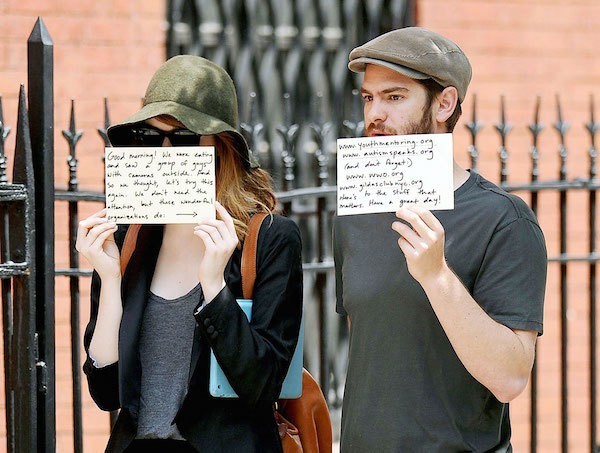 Emma Stone and her boyfriend Andrew Garfield win the award for creativity when it comes to promoting the charities close to their hearts.  In September of 2012, the couple noticed paparazzi outside the restaurant where they were eating and came up with a clever way of protecting their privacy.  They covered their faces with pieces of paper that read, “We just found out that there are paparazzi outside the restaurant we were eating in. Why not take this opportunity to bring attention to organizations that need and deserve it? www.wwo.org, www.gildasclubnyc.org. Have a good day!”  The couple repeated this trick in June of 2014, this time bringing attention to www.youthmentoring.org, www.autismspeaks.org as well. 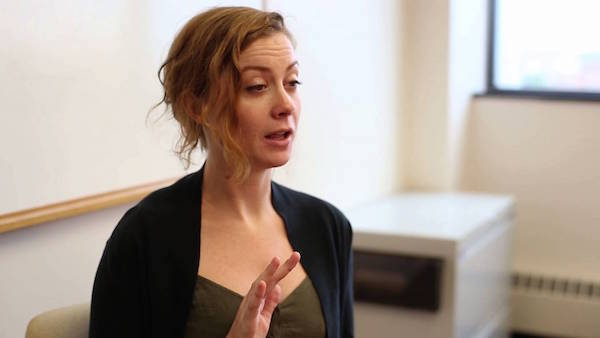 Hannah Brancato is an artist and activist working to challenge the world to think about our personal connections to social injustices.  Hannah Brancato and Rebecca Nagle formed FORCE in 2010 to create a venue for a more honest conversation about sexual violence in America. To promote this needed conversation, FORCE creates art to generate media attention, forcing people to talk about it.  Monument Quilt, is a specific campaign that stitches the stories of women who have survived rape or abuse onto squares of a quilt.  She says her goal through this piece of art is to break down the narrow-minded idea of rape, because everyone has such varied experiences.  Her hope is that by 2017 she will have enough squares to stitch the words “Not Alone” across a mile-long space on the National Mall. 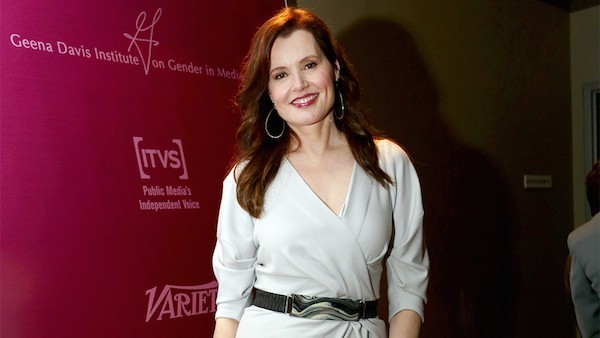 Geena Davis has long been an advocate for the equality of the sexes.  As a child, I always admired her not only for her beautiful red hair, but also for the fact that she usually played strong female roles in the movies I loved like Thelma in Thelma & Louise and Dottie in A League of Their Own.  The Institute is the only research-based organization working within the media and entertainment industry to educate, influence, and improve gender balance by informing children on the importance of reducing stereotyping and creating diverse female characters in the entertainment industry.  The institute works with children 11 and under. 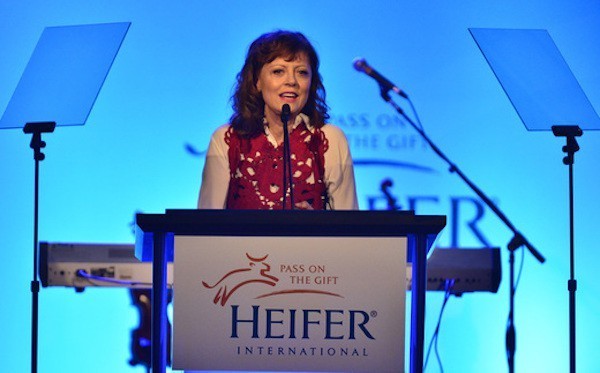 While Susan Sarandon has been a well-known activist for causes all around the world, she has been supporting Heifer International for more than twenty years.  Heifer International is a nonprofit organization dedicated to putting an end to world hunger and poverty, and in 2011 Sarandon traveled to Cambodia with her daughter, Eva Amurri Martino, to work personally with the organization. There she discovered that “women, particularly in poor rural communities, really are the ‘glue’ and the key to ending global hunger and poverty.”  They grow and prepare the food, so in a sense, they are on the front lines of the war against hunger.  Sarandon has dedicated decades to feeding the hungry and empowering women around the globe. 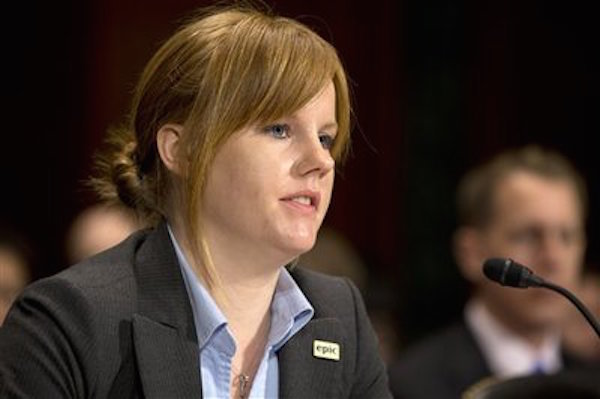 When I think about the many battles against injustice around the world, cybersecurity does not usually come to my mind, but thankfully, for Amie Stepanovich, it does.  Amie is an expert in domestic cybersecurity, surveillance, and privacy law.  She regularly responds to threats involving human rights and cyber surveillance.  Amie was recognized in 2014 as one of Forbes “30 under 30 Leaders in Law and Policy.”  She recently testified before Congress about domestic drone use, and continues to defend the digital rights of users everywhere.

10. Julianne Moore, Women of Worth 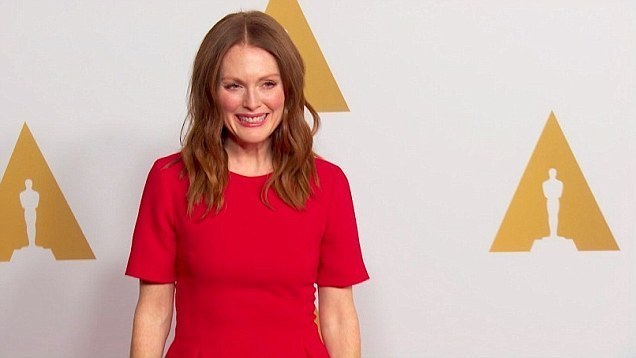 This program started by L’Oreal honors “women of worth” who are giving back to their communities by selecting ten women to receive $10,000 toward their cause and one to receive an additional $25,000.  Julianne Moore was inspired to become involved in this program because of a “woman of worth” in her own life–her mother.  She says her mother was married by 20, had three children by 25, and was still able to go on and earn two Master’s degrees.  Moore says this program struck a personal chord in her, and she has been blown away by the nominees.  The winners of the 2015 honors will be announced in November.

READ: The 10 Fieriest Redheads Throughout History

Freedom fighters can be found anywhere–on the front lines of our military, in impoverished schools in Africa, behind cyber surveillance screens, or in the red-light districts of Europe–the important part is not where they are, but that they are there.  It is an honor to be living in the same era as the phenomenal women on this list, and the many others not mentioned who are actively fighting for justice around the world.  Let’s shine light into the darkness, and Rock it like a Redhead!