A homecoming queen from Texas, Anahi Alvarez, shared her crown with her bullied redhead friend, Lillian Skinner, who was the brunt of a prank by other students. Some unnamed girls told Skinner she had been nominated for the homecoming court alongside her longtime best friends, Alvarez and Naomi Martinez, also a Grand Prairie High School senior. After learning of the prank, Anahi and Naomi, who have been friends with Lillian since 7th grade choir, created a plan to pass their crown to Skinner should either of them be named homecoming queen.

When it was announced that Anahi won, the winning Texas teen removed her tiara and sash, and in front of the entire school, gave it to Lillian, the 17-year-old girl who was made the brunt of a spiteful hoax. Anahi brilliantly showed us her compassion and why the school chose her to be its homecoming queen.

Writes NBC Washington: “Despite not being nominated, last night, in front of hundreds of students, friends and family gathered at the school’s Gopher-Warrior Bowl, Lillian accepted the honor from her longtime friend after being escorted to midfield.”

“Anahi is honoring a very hard working senior with her crown. We would like to announce Lillian Skinner, please step up and receive this honor,” said the school’s football game announcer.

“Lilly won. I just ran in her place,” said Anahi.

Lillian commented saying it was a dream. “When [Anahi] won the queen, I took a picture and she told me to come over. And I said, ‘It’s OK. It’s OK. It’s your crown, you know? My name is not on the list,'” Lillian said. “I was like, Wow, really? Like, is this a dream or something?”

“She’s so sweet,” said fellow 17-year-old Anahi of her bullied friend. “We need people in this world like Lilly.” 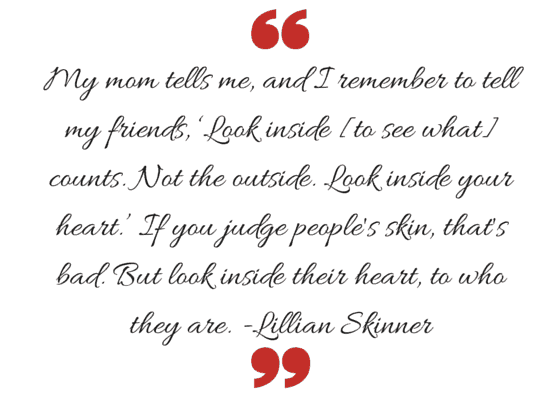 Redhead or not, every person should take Lilly’s advice and follow in Anahi’s footsteps.

The Principal of the high school, Lorimer Arendse, who was let in on the plan shortly before the winner was announced, said, “In all my time in school, this is probably the greatest moment I’ve ever experienced as a principal.” Arendse brought Lilly onto the field under the guise of taking photos for the school.

“Seeing the look on her face and the way she reacted toward it, it was priceless,” said Naomi Martinez. “I knew it was the right decision.”

Anahi agrees. “Well, for me, I want to say, and I always will say, ‘Lilly won. I just ran in her place, in her position. When they ask me, ‘Were you homecoming queen?’ I say, ‘No, Lilly is homecoming queen.'”

We need more empowerment in high school so we can end bullying once and for all! Just like Lilly, may we all Rock it like a Redhead!

RELATED ARTICLE: HOW TO BE A REDHEAD’S CONFIDENCE SECTION