Megan Hayes is known for her role as the District 6 Morphling addict in “Hunger Games: Catching Fire.” From a young age, she knew entertaining was her calling. She moved to New York City where she studied at the Experimental Theatre Wing. After graduating with honors in Acting, Megan began writing and performing her own work. Despite loving New York and all that it had to offer, Megan decided to move back to Atlanta, which was a great choice because this is where her movie and television career got its start. While continuing to do countless theater projects, Megan was cast in HBO’s “Eastbound and Down,” “What to Expect When You Are Expecting,” as well as numerous commercials and TV guest spots.

We sat down with Megan to discuss her many acting roles, the one celebrity who made her ‘turn red’, favorite beauty tips.. and a ton more.

H2BAR: We read you’ve been involved in comedy acting since you were a teenager. How did you get into it?

MH: When I started acting I was certain I wanted to be a very serious actress. My sophomore year in High School I auditioned for my first musical, “The Pajama Game.” I wanted the part of Gladys. You see, she sings Hernando’s Hideaway and I thought for sure I was the perfect awkward, promiscuous girl to do it. There was nothing sexy about my 15 year old self. I ended up getting cast in the comedic role of Mabel, the nosey secretary. I was SO bummed at first. I mean, I WANTED TO SING HERNADO’S HIDEAWAY DAMMIT! But on opening night, the moment I got my first laugh, I was hooked. Absolutely hooked! It was such a blessing in disguise, because it was really what I was meant to do.

H2BAR: Were there a lot of redheads where you grew up?

MH: I was raised in Georgia and born a strawberry blonde, but as I got older it got darker. I became a vibrant redhead right after college in New York City. So, as much as I would like to say that there were NO OTHER REDHEADS in NYC that would be a big lie.

H2BAR: Do you play a redhead in most roles you’re in?

MH: In TV and film, absolutely! I’ve had to dye my hair only a couple of times for shows. Once when I played an evil cheerleader in “Be Aggressive”, I had to add a bunch of blonde into my hair, but I still kept it strawberry underneath. As well, I played Annie Sullivan in “The Miracle Worker” and was a brunette for that. And I’ve done several plays where I wore a wig, usually it’s for a period piece. I cannot lie, I do love wearing a wig because it makes styling easy peasy!

H2BAR:: You are in the newest film, “Hunger Games: Catching Fire.” Can you tell us what it was like working on this epic film?

MH: I play the Morphling who is the Tribute from District 6. “Catching Fire” is kind of like the TV show, “Survivor: All Stars.” So, my character was a past Victor who sadly has developed a terrible drug addiction to a drug called Morphling. My strength in the Games is camouflage which really turns out to be an asset because I save Peeta’s life. SORRY SPOILER ALERT! But come on, if you haven’t seen it by now. Working on this film was a dream come true! Everyone was so nice to little ol’ me and I got to go to Hawaii for a month to shoot. So much fun.

H2BAR: What was it like working with Jennifer Lawrence and so many other amazing actors?

MH: Everyone was amazing. I have nothing but wonderful things to say about them. When we were sitting in Hawaii, we met for rehearsals, it’s me and all the famous. I’m looking around thinking, “Who the hell am I? What am I doing here?” But everyone was really inclusive, loving, supportive. In shooting the closeups of my death scene, Jen was so great and kind and fun and supportive.

H2BAR: What is your favorite movie/show you’ve been in?

MH: That’s a 3 way tie for me. “Catching Fire”, of course; I LOVED being on “Eastbound & Down” and playing Annie Sullivan in the “Miracle Worker” in Atlanta was a very special experience for me. Helen Keller and Annie Sullivan, what an amazing true story! 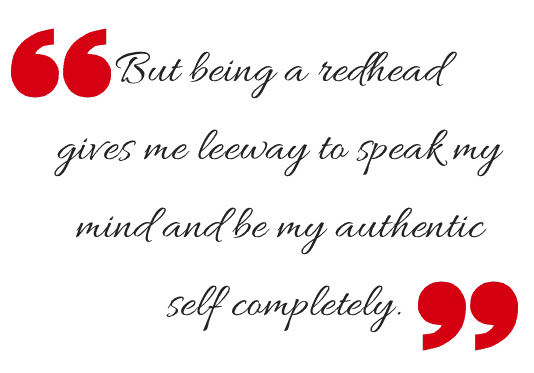 H2BAR: Who is your favorite redhead actor/actress?

MH: I can’t narrow down who my favorite redheaded actress is, so I’m giving you my top 3: Madeline Kahn, Carol Burnett and Lucille Ball. Each of these talented women are comic geniuses in their own right, not to mention beautiful funny ladies. Carol Burnett is the reason I became a redhead. If she’s reading this right now, Ms. Burnett remember the time I waited for you outside a stage door in NYC (you don’t but let me tell you) and when you came over to chat with me all I could say was a bashful “hi”? What I really wanted to tell you was you are the reason I became a redhead. THE REASON!

H2BAR: We’ve heard that you’re a foot model! You must have great feet!

MH: (Laughing) I started foot modeling years ago. And it’s a Cinderella story because I got my first job because my foot fit the shoe! How often does that happen?! I haven’t done it in a long time, but you can see pictures of my feet in catalogues and online for Footsmart. 5 bucks to the person who can pick out my feet!

H2BAR: We’ve also been told that you teach drama. Tell us about that.

MH: I taught drama and writing in Atlanta at several places, theatres, schools and camps. I even taught full time at a private school for a year, however I have taught all ages. I love it! Teaching is such an underrated and underpaid position in this country. And it’s so important! Many of my life changing moments have been because of an awesome teacher.

H2BAR: What is your favorite color to rock with your red hair?

MH: Bright green, but I love wearing any jewel tone. It goes great with my hair and fair skin.

H2BAR: What are your must-have beauty items?

MH: For my hair, I love TIGI Catwalk Curlesque Curls Rock. For makeup, Maybelline mascara is my favorite and Bare Minerals is a must because it makes my skin look and feel amazing.

MH: I wash my hair with VERY expensive shampoo and conditioner. For product, I love Beach Waves by Gnarly Whale. I got that in my gift bag at the GBK Pre Globes gifting suite and LOVE IT. And, I usually let me hair air dry and go wavy crazy.

H2BAR: How do you keep your fair skin looking so beautiful?

MH: Honestly, I wash my face with Purpose. I swear by that stuff. I have super sensitive skin (like most redheads) and it works for me. And I use an everyday St. Ives lotion on my face. But I moisturize RELIGIOUSLY! And drink a TON of water. And never go to sleep with makeup on.

H2BAR: With Atlanta being so humid and hot, how do you protect your fair skin and red hair?

MH: First and foremost, I stay out of the sun and wear a lot of sunblock! I find that the humidity works for my hair with my curls and all.

H2BAR: Does red hair run in your family?

MH: Ya know, it does! Every third generation on my mom’s side has a redhead. I might dye my hair now that I am older, but I have such a redhead personality.

MH: For the good and the bad, it makes you stand out. And for some reason it affords you a lack of censorship. Not that I think you should take advantage of that, absolutely not. But being a redhead gives me leeway to speak my mind and be my authentic self completely.

MH: I’m currently writing a TV pilot with my writing partner that I am SUPER excited about! It’s a comedy and it’s going to be good. So keep a lookout!