H2BAR: It’s official! The “Boy Meets World” spin-off “Girls Meets World” is premiering in 2014. Will we be seeing you on any episodes?

MW: The news of the pick-up is really exciting. I went to the taping of the pilot and I have to say it was fantastic. Several of us were on hand to cheer everyone on.  I saw Will Friedle for the first time in years.  Such a great reunion.  It was like no time had passed.  A lot of the crew is the same as Boy Meets World, so it was special to see everyone again.  I’m really looking forward to seeing how the show unfolds. Michael Jacobs (the Creator/Executive Producer of Boy Meets World/Girl Meets World) has promised that the old cast will be integrated. I’m so curious to see what Rachel has been up to all these years.  Jack and Rachel left for the Peace Corps, so it will be interesting to see if they stayed together. Are they married with kids?  Matt Lawrence and I joked that Eric would’ve never left Rachel and Jack alone, so he probably came after us in Guatemala or wherever we ended up!

H2BAR: How is it to reconnect with the “Boy Meets World” after 13 years of being off-air?

MW: Going to the ATX Television Festival in Austin last month, we got to have our first official reunion.  It was so great being able to connect with everyone again.  We had stayed in touch over the years, but this was the first time all of us were together in the same room since the show had ended. And when we saw each other, it was like no time had passed.  Being able to connect with the fans that weekend was special, too.  Boy Meets World has become such an iconic and beloved show over the years and the fans had so much love for everyone.  It was really special to see that.  I am so happy and proud that I was a part of a show that has brought so much joy to so many.

MW: I was born in Long Beach, CA (with auburn hair-that later changed to a golden blonde). I am an only child who grew up performing and wanting to be an actress. My parents wouldn’t let me do it until age 16. I got my first job on The Bold and the Beautiful while still in high school. I did that for three years (as a blonde). When I left the show I needed a change and after experimenting with different hair colors, I found red. It changed the direction of my career completely. I got cast in Boy Meets World and my short, sassy red hair helped landed me the job. It set me apart from everyone.

H2BAR: Has having red hair inspired your career as an actress?

MW: Not many people can truly wear red, so I’m lucky it goes perfect with my paler skin tone. That being said, it has set me apart from all the blondes in Hollywood and made me unique. Plus, I get to be sexier and have more fun with my roles without the blonde stereotypes. I really feel comfortable with my hair color. It showcases my personality.

MW: It’s definitely a lifestyle. Even though I color my hair I feel a kinship with other redheads I meet. It’s like a secret club. The confidence and uniqueness it gives me is a huge part of my daily life.  I get a lot of compliments on it, too.  Everyone thinks it’s my natural color and I don’t usually correct them! 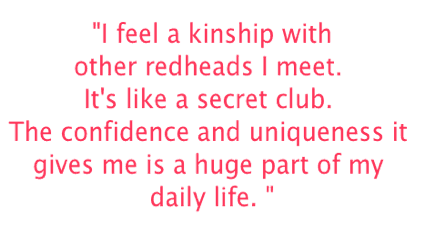 H2BAR: All of our redheaded readers want to know, what is your number 1 beauty secret? Are there some essential “redhead friendly” products you can’t live without?

MW: I like Kerastase color care shampoo (in a pink bottle). I also use their leave in conditioner that has a sunscreen which is very important to prevent fading- especially in summer.  And make sure to always put a little shine serum in-it will make your hair pop.

MW: I’ve just completed a screenplay.  It’s about a washed up soap opera actress who will stop at nothing to get her career back.  She finds out her old fan club president (whose life she made miserable and nearly ruined) is now a big time Hollywood producer with a hot new show.  She decides to hunt him down so he will give her the lead role.  It’s a Bridesmaids style comedy with a dark comedic twist.  I’ve had a lot of fun writing it.  It ties in loosely with my soap opera past.

H2BAR: You are a strong woman who has worked hard to succeed. If you can give any advice to our redheaded readers, what would it be?

MW: Be proud of your hair and wear it with confidence. It really is something unique and beautiful!  I can’t understand why natural redheads would change their color- they are so lucky to be born with it!  And freckles are sexy.